Playboy - End of an Era 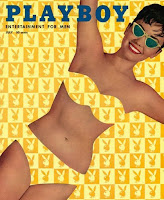 The passing of Hugh Hefner makes me remember one of my prize possessions - a collection of vintage Playboy magazines I inherited from my grandfather. They are now in the 'library' of my own cottage and lest you think I keep them for prurient interests (an innocent Google search of an ambiguous word will bring up infinitely worse images) I consider them interesting historical documents. Yes, I read the articles.
I wrote about them back in 1999. Here's that column...


Angel In The Centerfold

We celebrated my Grandfather’s 85th birthday last week.  He shows no signs of slowing down.  He goes shopping every day, and although legally blind he still won his local mini-golf tournament.

It’s a good thing I’m not counting on any inheritance.  His mother kept going well into her nineties.  I’ll be in the next room at the retirement home before I’m likely to collect a dime.

Besides, I already have the family treasure.  Packed away in the basement is Grampa’s vintage Playboy collection.

The hundred or so magazines run from the late 50s to the 70s, and were the highlight of my summers at the cottage, where Grampa maintained his library.  He kept them in the attic, along with a couple of nudist volleyball magazines.  The nudist magazines caused great confusion during my formative years.  In the 50s everyone’s bodies were so highly airbrushed that they were as featureless as Barbie dolls.

Looking back though the old Playboys is like opening a time capsule. The men’s fashions start off looking like Drew Carey in the fifties, and end up in with the velvet capes and ruffled shirts of the seventies.  It would be funny except for the fact that most teenagers are now wearing the same clothes.  Not to mention Austin Powers.

I get hours of fun looking at the ads. Bob Dylan’s greatest hits are for sale on 8-Track or reel-to-reel tape for $2.50.  And who could resist Ravi Shankar Live at the Monterey Pop Festival, or John Davidson singing Georgy Girl?

The 1963 Volkswagen Beetle looks interesting, especially with a new one selling for $1,500.  I wonder if they'll ever catch on?  The same goes for these new home computers they kept talking about in the 70s.  I can't imagine anyone ever needing one of those things.

It’s not all funny.  There’s a letter to the editor by the mother of Lee Harvey Oswald saying she doesn’t believe her son was a lone gunman, spawning decades of conspiracy theories.  An American Senator writes in 1968 questioning the wisdom of waging war in Vietnam.

And of course, there’s the sex.

Looking through the back issues it seems like there was less nudity in Playboy than you now get in an evening of television.

What really surprised me was how the centerfolds looked.  In a word, they looked normal.

While certainly not chubby, make no mistake - these are full-figured gals. No skinny stick insects with plastic additions that today inspire a generation of girls to develop eating disorders.  These days they would be rushed off to a weight clinic and fed nothing but sprouts and low fat yogurt.

The models aren’t airbrushed to perfection.  Tan lines are there for all to see. So is every mole and imperfection.  In short, while pretty, they didn’t set up standards that are impossible to meet.  They are real people. The girl next door.

Somehow that seems like a healthier attitude towards beauty than we have today with liposuction, cosmetic surgery and trying to squeeze a size 12 body into a size 2 dress.

By my calculations, Miss November 1966 will be fifty-five sometime this year.  I hope she's aged gracefully and naturally. No matter what, according to Grandpa's library she'll always be twenty-two. 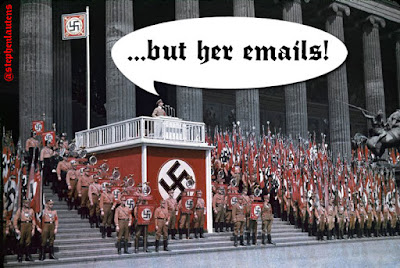 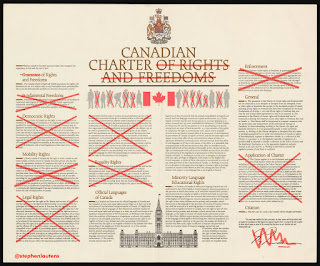 Lessons in Fatherhood - The Newborn Years


There are things that no baby book can prepare you for as a new parent. You can read all you want, but it's like learning to drive a car by looking at the owner's manual. Nothing beats getting behind the wheel.

So, for the benefit of anyone who either is considering adding a tax deduction to the family or already has one but has no idea if it's normal, I've put together a couple of things they never tell you about having a baby in the house.

A baby has the ability to sense the exact moment when dinner hits the table, your wife gets that receptive look in her eye, or the five part murder mystery you have been watching for the past two months is about to end and explain who did it and why. It doesn't matter how fast asleep the baby is or how quiet you are, it knows when you are in danger of enjoying yourself. At that point, it will shriek like it is on fire, making you run upstairs in a way that would cause your insurer to cancel your policy. When you arrive, the little darling will be quietly smiling and looking at you like you've interrupted something important that they were doing.

A baby will not just spit up on your tie as you are heading out the door to an important business meeting. That is far too obvious and they know you are ready for it. Instead, a baby will fake you out with a small, cute drop of drool. Don't fall for it. It's only bait. If you do cautiously approach its slobbery face with a tissue, while your attention is focussed on the top end it will take the opportunity to silently whiz on your tie, shirt and shoes. You will not even feel it until it is too late. Then, while you're using a bath towel to dry yourself off, it will barf down your collar or up your sleeve. The first rule of infants is that they have an inexhaustible supply of revolting bodily fluids.

No method of calming down a baby will ever work twice. If you find the magic solution that makes him happy and puts him to sleep, the next night it will have the same calming effect as tying a large bat around its neck. Stuffed toys that previously delighted them will instantly have the same effect as garlic on a vampire.

Everyone with a baby near the same age as yours will instantly enter into competition with you. If yours sleeps for six hours, theirs sleeps for eight. If yours sleeps for eight, theirs is hibernating and will probably wake in time for college. By the time your baby has learned to roll over, the others are allegedly doing triple backflips into a full pike and sticking the landing. These are all lies, the proof of which is how their babies behave like rather large potatoes when you run into them at the park.

Mothers will insist that babies have to wear both socks and a dopey hat before they can be seen in public. Men as adults would just as soon do without either hats or socks, and don't understand why babies should be made to wear them. There just seems something terribly wrong about making anyone who can't defend themselves wear a floppy plaid hat. Regardless, it is a universal rule that socks that took fifteen minutes to put on a baby will be off and lost forever in less than thirty seconds.

So take heart. You are not alone.

And besides, they'll be teenagers in a blink and you'll be clueless once again. I think it comes with being a parent. Our own parents were just better at hiding it.

Posted by Stephen Lautens at 10:31 AM