The "right" to bear arms in Canada - not.

Harper's Public Safety Minister says "To possess a firearm is a right..." No it is not in Canada. Amazing the level of propaganda or ignorance from the "Public Safety" Minister.
http://www.nationalnewswatch.com/2014/07/31/public-safety-ministers-statement-on-gun-ownership-right-put-to-test/#.U9pfjUi0YXX

In Canada there is no constitutional or surviving common law "right" to a firearm. The Criminal Code and firearms regulations "cover the field". In 1993 (Wiles) the Supreme Court said: "Canadians, unlike Americans, do not have a constitutional right to bear arms."


[16] Moreover, contrary to the Montagues’ contention, the Supreme Court of Canada has addressed the question of whether the possession and use of firearms is a constitutionally protected right and has rejected the notion that Canadians have an absolute constitutional right to possess and use firearms. See R. v. Wiles, [2005] 3 S.C.R. 895, at para. 9; R. v. Hasselwander, [1993] 2 S.C.R. 398, at para. 414. Although s. 7 of the Charter does not appear to have been expressly invoked in those cases, the Supreme Court stated in Hasselwander at para. 414 that, “Canadians, unlike Americans, do not have a constitutional right to bear arms.” In Wiles at para. 9, the Supreme Court said: “[P]ossession and use of firearms is not a right or freedom guaranteed under the Charter, but a privilege.”

[19] The Supreme Court has also recognized that the possession and use of firearms is a heavily regulated activity aimed at ensuring peace, order and public safety: see Wiles, at para. 9; Reference re Firearms Act (Can.), [2000] 1 S.C.R. 783.

Pretty much case closed. The Minister of Public Safety should open a law book once in a while.
Posted by Stephen Lautens at 11:47 AM

Luc Besson's new film "Lucy" is based on the old myth that we only use 10% of our brain capacity. Not true, but for some reason the movie poster got me thinking about our Toronto Mayor Rob Ford... 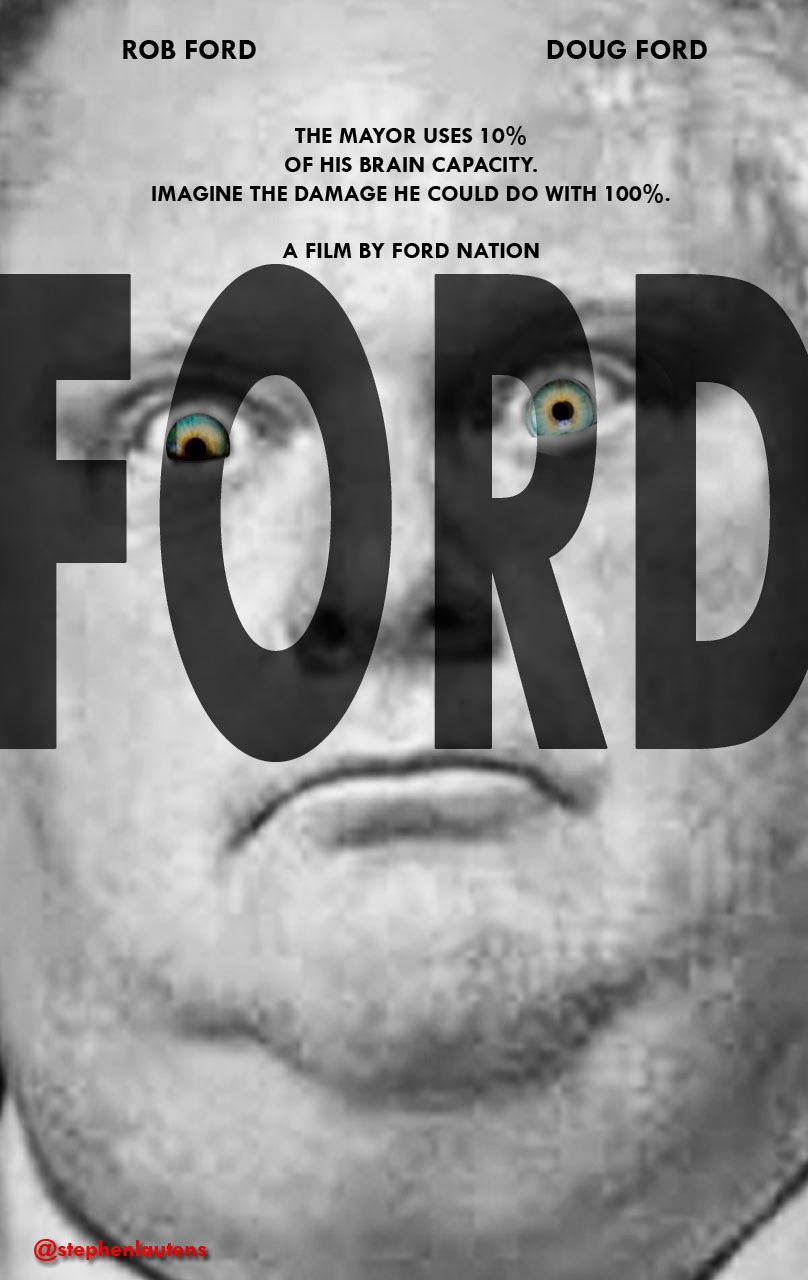 Posted by Stephen Lautens at 4:09 PM

Harper, Lawyers and the Rule of Law

This is more of a reminder for a larger project I'm fiddling with. I'm fascinated as a lawyer (non-practicing now, thank God) by the attitude towards the law, Charter and courts shown by the Harper Conservatives. Contempt I think is the word that best describes it. The contempt is borne out of a complete and willful lack of understanding of how our parliamentary democracy works and how laws have to be in conformity with the Constitution (including the Charter of Rights).

Theirs is a very unsophisticated - almost juvenile - belief in the "Supremacy of Parliament" and the false god of raw numbers democracy. Due largely to the influence of American republicanism (big and small "R") and prairie charismatic populism, they believe firmly in the right of the majority to tyrannize the minority. The courts of course stand in the way of it as a bulwark against laws that overstep constitutional or deeply-rooted common law precedent.

A recent example (one of many, especially in the wake of the Nadon decision) is a quote from MP Larry Miller, the four-term Conservative MP for Bruce-Grey-Owen Sound. It's saddening that in 4 terms as MP he has still not learned anything about how the parliamentary system works. In fact, he must be actively taking steps to not understand it.

Harper's chair of the Transport and Infrastructure committee, and known as the Conservative “Keeper of the Flame”, Miller recently said:

“Taking parliamentary powers away ties into the stories that the courts are making the laws. In my opinion, Parliament should make them and if the public don’t like them, then the public will straighten things out. If you take things one step further, why elect people and pay them to do something the courts are doing. But the courts are not there to make laws, they are there to interpret and enforce those laws.

“There are two main reasons I became a Conservative. Firstly, I’m fiscally responsible — I want to see smaller government, not bigger government. Secondly, I’m all for rights and freedoms but the Charter complicates things. Pierre Trudeau did this willfully and deliberately, taking rights away from the majority to protect the minority. The Charter of Rights puts all the lawmaking decisions into the hands of the Supreme Court and to me, that is not what democracy is about."

It's hard to know where to start with this level of ignorance, especially the lament about Trudeau and the Charter taking away the right of the majority to beat the tar out of minority interests whenever they feel like it. That was sort of the well-publicized point of it.

Then you have Dan Albas, the MP for Okanagan-Coquihalla, who says "he respects the courts" but the goes on to show contempt for the judicial process:

"Often the Plan B is to do an end-run around our democratic process and turn to the courts where it seems some judges are quite happy to engage. This can result in decisions contrary to what have been decided in our democratic process," Albas told CBC Radio's The House. "Basically what you're having is a judge can overturn and then cost the taxpayer a lot of money without any accountability or representation on their behalf."

Because rights are judged on how much money they cost taxpayers, which the government wouldn't have to spend on court challenges if they cared about them in the first place.


Here's another quote from an anonymous Harper MP that shows some of this contempt for professionalism and the legal profession in particular by his government:

Another recounted receiving a call from the Prime Minister’s Office informing her that she’d received an appointment in the justice ministry: “I said, ‘Tell the prime minister to call me back, I didn’t finish law school.’” When the prime minister called, he told the MP that the department had too many lawyers, and that he needed “some practical politicians in there.”

Imagine the Department of Justice having too many lawyers. Do you think this might be the attitude that has led to so many of their laws and cases being thrown out by the courts as clearly unconstitutional?
Posted by Stephen Lautens at 2:52 PM

We're Better - Off With Harper, or something

Here's a little Photoshop to counter the new paid for social media campaign by the Conservatives that pops up on Twitter or Facebook as "promoted". If you click on it you are immediately asked for your email address for fundraising, CIMS and what have you.

Feel free to post in reply whenever you see the original.
Posted by Stephen Lautens at 4:46 PM 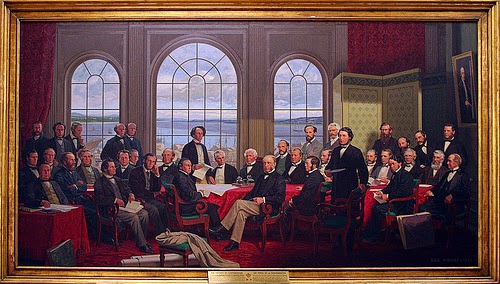