On February 15, 1965 the Canadian flag as we know it was raised officially for the first time. Next month is the 50th anniversary of this event, but where are the Conservatives who have figuratively, if not literally, wrapped themselves in the flag at every opportunity? Pretty much missing in action.

Having spent boatloads of cash on the War of 1812 ($28 million) and recently on Sir John A. Macdonald's 200th birthday ($4 million), how much have they set aside for our national flag's 50th?

To put that in perspective, I created this little infographic: 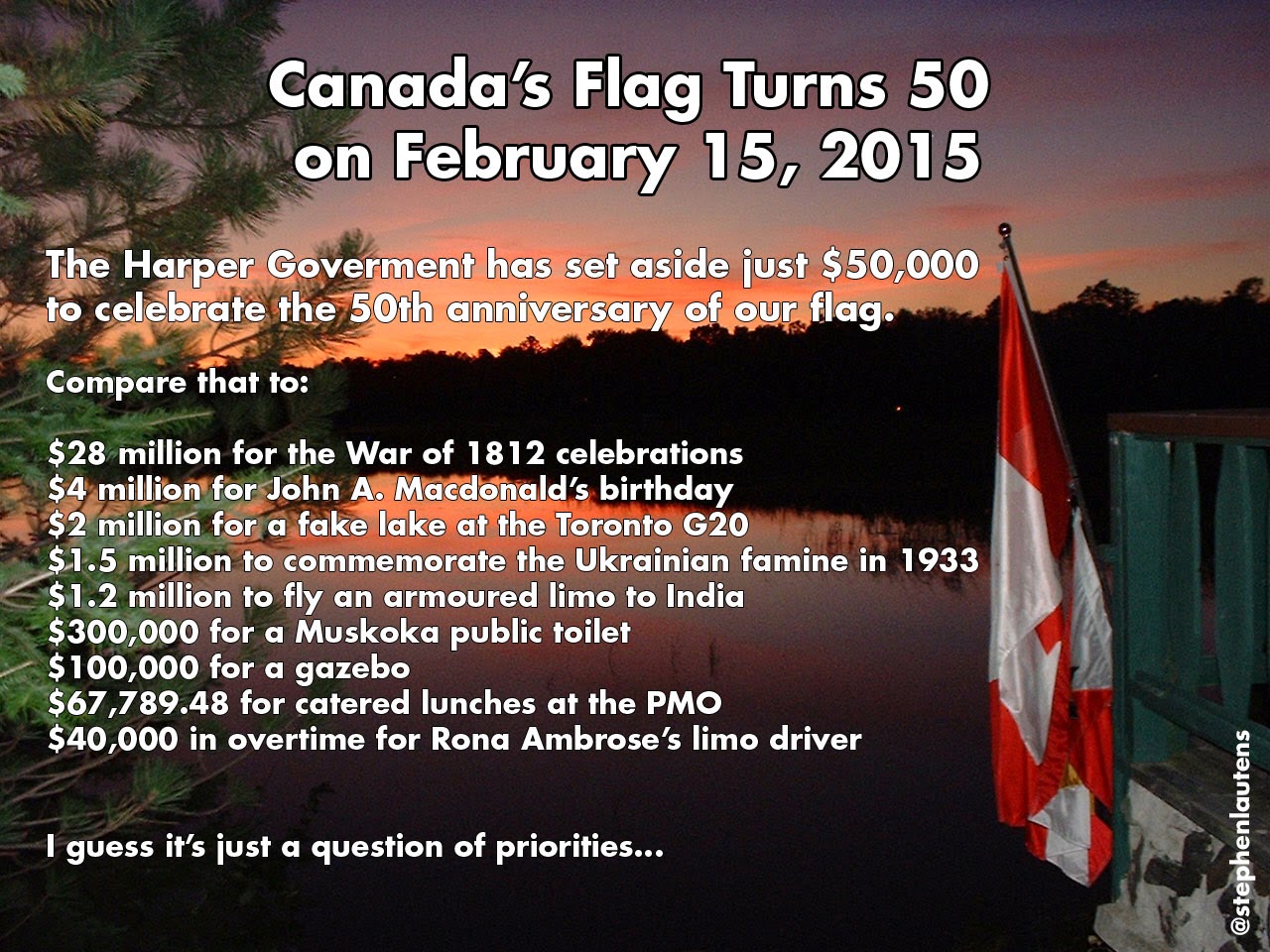 When I mentioned this on twitter, I was surprised to find there were still barnacled conservatives for who this is still a sore point. The Red Ensign forever! No to the "Pearson Pennant"! It was another Liberal plot to rob us of our identity and hand our heritage over to minorities, etc.

And you thought dinosaurs were extinct.

Some decried the absence of British blue (actually Scottish, as the blue part of the Union Flag is for Scotland's St Andrew Cross). In fact, red and white (no blue) were declared the official colours of Canada in November 1921 by King George V in the last month of Conservative Prime Minister Arthur Meighen's government. Until 1946 the British flag (known erroneously as the Union Jack) was the official flag of Canada. The Red Ensign was used on government buildings unofficially. Updated with the Canadian shield granted in 1921, the Red Ensign only officially became the Canadian flag in 1946.

Finally, what is there to make of this from the 2015 Government of Canada History Awards essay competition?

"Current flag"?  "Does it still reflect Canadian society today?"  If I didn't know better, I'd think someone was testing the waters to see how attached we are to our "current flag".
Posted by Stephen Lautens at 2:57 PM

Today's Sir John A. Macdonald commemoration was a carefully crafted "non-partisan" tribute. Social and mainstream media has been abuzz about Macdonald's terrible record regarding the abuse of First Nations under his governments. For that reason they had two FN representatives front and centre to give an awkward blessing. Macdonald's chronic alcoholism - which left him paralytic and unable to function for days on end and even when Canada was in crisis - was turned into an endearing human frailty.


More awkward was the fawning introduction by one of Harper's own former speech writers as MC of the event (at 16:00 in the video). He oddly called Harper's father a "public historian" when in fact he was an Imperial Oil accountant and wrote one small booklet on cap badges. He gilded the lily in calling Harper "Canada's servant", before Harper gave a fairly halting and dull speech about Macdonald.

After condemning the Hebdo Charlie killings and proclaiming Canada's values to include freedom of the press: "Harper did not make himself available to the large media contingent on hand for the event and did not take questions from reporters."

What If The Gun Lobby Treated Muslims The Same As Their Guns?

The mantras of the pro-gun / anti-regulation crowd are pretty well burned into the public psyche. Whether it is fighting the backlash against stricter controls suggested in the wake of the newest shooting or attempts to extend or defend their right to bear arms, they have well-worn stock arguments to distance themselves from gun-related tragedies.

However, are they prepared to extend the same reasoning they use to defend themselves to another group, such as Muslims, especially in the wake of the Hebdo Charlie massacre in Paris, when a flood of anti-Muslim sentiment poured forth on social media?

Just cross out “gun owner” and substitute “Muslim” in any of their catch phrases and see if they are prepared to apply their own rhetoric to being Muslim:

While many of these are actually true in the case of Muslims, I’m not sure many gun owners would recognize how well they apply. All I’m looking for is a little consistency here and extend to others their own arguments.

The one thing I don’t think you’ll ever hear the gun lobby say is: “The solution to a tragedy involving Muslims is to have more Muslims on the streets.”

Somehow that only applies to Muslims guns.

_______________
Obligatory note:  I know there are moderate and sensible gun owners out there who don't have an emotional bond to their guns. I have been a target shooter myself. It is a lot of fun, but hardly something to build an entire philosophy and lifestyle around. Unless you're in the army or a trapper, they are basically toys. I'm sure there are gun owners who are not right-wing nuts. Unfortunately they are never the ones I hear from on social media.
Posted by Stephen Lautens at 5:47 PM