Last week was the Past Presidents' Dinner of the Lawyers Club. It is an annual tradition to welcome the current president (and future Past President) into that august body. Some of Ontario's greatest jurists were presidents and I had the honour to meet them decades ago when I was much younger and they were still alive. At one point being president of The Lawyers Club was the fast track to an appointment as a judge. Sadly, no more.

At least I got to wear my new fancy velvet dinner jacket from a recent trip to London and see some old friends. One of the oldest traditions is the Past Presidents' Cup, which is filled with champagne and passed around until it reaches the newest Past President (welcome John Mclellan) who has to finish it before giving his speech. The addition of up to 32 oz (!) of champagne has made for some memorable speeches (for the listeners, anyway - some of the speakers may not remember what they said).

If you look closely, you can see my name on the Presidents' Cup from 1997. 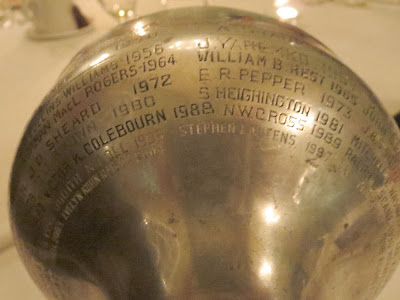 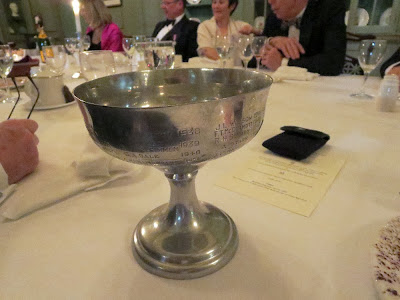 Posted by Stephen Lautens at 12:34 PM

Email ThisBlogThis!Share to TwitterShare to FacebookShare to Pinterest
Labels: The Lawyers Club

I'm actually in London, England at the moment, but there is no escaping the Rob Ford fiasco. First it was on the BBC, which can't understand why he hasn't stepped down, then I catch CP24's jaw-dropping interview with Rob Ford's mother and sister on the Internet.

I've tried to highlight some of the main points they seemed to be making in this handy top ten list:

10. Friends who seem nice when they are brought around the house, but turn out to be wanted men.

9. Not having a driver so you can get around when you're drunk.

7. The media and its obsession with reporting "the truth".

5. Whomever keeps slipping vodka into his Tim Horton's cup.

4. Doug telling him constantly, "Are you going to let them get away with that?"

2. Chiefs of Police who are easily offended by elected officials consorting with criminals.

1. The fact that cheap video cameras are everywhere.
Posted by Stephen Lautens at 6:16 PM

Lots of fun last night meeting with fellow contributors to the newly-released "Chicken Soup for the Soul: O Canada - The Wonders of Winter." About 28 of us signed 300 copies chain-gang style, and every single one of them was sold by the end of the evening.

Many thanks to editor / author Janet Matthews for organizing the book and the event.

Posted by Stephen Lautens at 10:54 AM

Email ThisBlogThis!Share to TwitterShare to FacebookShare to Pinterest
Labels: Chicken Soup for the Soul

On Tuesday, Nov. 5th, over 30 of the contributing authors of "Chicken Soup for the Soul - O Canada: The Wonders of Winter" (including me) will be at a massive book signing launch at the Keating Channel Pub, 2 Villiers St, Toronto, near Cherry St (south) & Lakeshore Blvd. 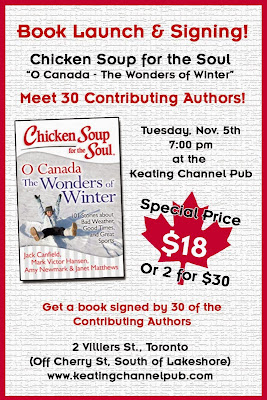 Posted by Stephen Lautens at 8:25 PM