The Arts and a sustainable future

For the past few years I've belonged to a group of lawyers, academics, businesspeople and former politicians that meets once a month to engage in friendly debates. They call themselves the 'Muddy York Debating Society.'

A few months back I was invited to debate on the subject of "Are the Arts essential to a sustainable future?" I argued in the affirmative. Here's what I said:

As we all know, these debates always come down to definitions, and lawyers love to play with definitions. As they told us in law school, definitions make the difference between fly poop and pepper. 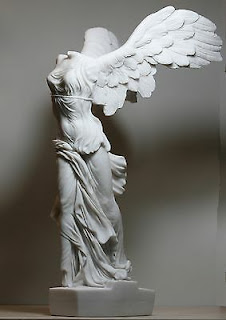 “The Arts are essential to a sustainable future.” The three key words for definition in this short sentence are “arts”, “essential” and “sustainable”. Let’s deal with each of them.

But if we go back to the simplest meaning of the word – enduring – then there is no doubt that the arts are the most enduring and therefore sustainable part of the human past, and therefore of our future.

Art. What is art? Is it like pornography – we know it when we see it? Or is it defined in the negative? As The Edge of U-2 once commented, "We don't know what it is, so it must be art." Leaving aside such philosophical questions, the seven arts are traditionally agreed to be: Architecture, Sculpture, Painting, Music, Poetry, Dance, and Performing.

When we look at the long story of recorded human history, what is it that endures? Art. The oldest known cave painting is a red hand stencil in a cave in Spain. It has been dated to older than 64,000 years. In fact, it isn’t even human – it was  made by a Neanderthal. In the end, Neanderthals were not sustainable, but their art was. It endured longer than they did.

Architecture is one of the most enduring and therefore sustainable of the arts. We can still stand on pyramids and ziggurats built thousands of years ago. Egypt's Old Kingdom era tombs were constructed some 4,500 years ago, making the mosaics of Pompeii look positively youthful at only 1900 years old.  We can still stand in the Roman Forum and Nero’s box at the Coliseum. We can still shop and discuss at the Acropolis at Athens and the Agora, from the 5th century BC, where Plato and Aristotle taught.

Sculpture. How many people have stood before the Venus de Milo, or the Winged Victory? The Venus de Milo was sculpted sometime between 150 and 125 BC. The Winged Victory of Samothrace dates from 200 BC. Both are mere babies compared to Venus of Hohle Fels, an Upper Paleolithic Venus figurine made of mammoth ivory dated to between 40,000 and 35,000 years ago. It is the oldest undisputed example of a depiction of a person. This isn’t even Neanderthal – it is from the beginning of the Upper Paleolithic from the earliest presence of Cro-Magnon in Europe. Now that’s sustainable.

I mentioned Plato and Aristotle. We can still read their literature – along with other plays and philosophies of Ancient Greece. The Histories of Herodotus is considered the founding work of history in Western literature written almost 2500 years ago. Who hasn’t struggled through Chaucer, or Spenser’s Fair Queen, or Beowulf? Literature is an enduring art.

Poetry is one of the seven arts, from Homer’s 8th century Iliad and the Odyssey, to the Song of Solomon, and TS Elliot’s Love Song of J. Alfred Prufrock. For those who think poetry is dead art form, consider National Youth Poet Laureate Amanda S. C. Gorman, who spoke at the inauguration of US President Joe Biden, and moved a nation with the power of her poetry.

Performing: Who among us didn’t have to read Antigone, one of Sophocles's trilogy of plays written in 441 BC. The Roman historian Livy wrote that the Romans first experienced theatre in the 4th century BC, with a performance by Etruscan actors. The Greeks had theatres centuries before that. Shakespeare entertained packed houses 400 years ago, and continues to today. In fact, there are no fewer than 525 feature films which give William Shakespeare some form of writing credit - although no royalties - including The Lion King and West Side Story. No doubt people acted out the hunt around campfires since the origins of the human race. Mozart, Wagner and Verdi still draw crowds. Theatre and performances are one of the great communal activities humans enjoy – and one we have sorely missed during Covid. Surely the performing arts are “sustainable”.

Sustainable may also include the idea of relevant or relatable. Can we relate to ancient art? Can we see ourselves and our humanity in art from persons and civilizations long dead? Yes. It still moves us.

Lastly, let’s look at “essential,” as in “the arts are essential to a sustainable future.” The essentialness of the arts is proven by its very endurance. That it has been present since literally before we were human proves its essential nature to our humanity. It is clear to see that creating art is a natural, innate, primal behavior. Children instinctively make art. It exists in every culture. It is a fundamental human behavior. It is part of who we are.

Art is an essential part of human communication. It helps us share ideas, emotions and concepts that are otherwise difficult to express in words. Art extends the way we are able to communicate.

There is a contemplative and spiritual aspect to art that transcends ordinary communications. Some would argue that it allows us to connect with the divine. Jung thought the artist was “one who carries and shapes the unconscious, psychic life of mankind.”  Freud, argued that it taps into deeper human psychological forces that allow us to better understand ourselves. Aristotle believed that art purges the soul of dangerous thoughts and gives a pleasurable relief to the strongest of emotions. It is cathartic.

Art is a history lesson, an historical record, a preservation of culture, and a human autobiography all in one.  Art reflects cultural values, beliefs and identity, and records our own lives and experiences over time. Surely that is essential. It is not only sustainable – its sustains us.

Experiencing and creating art is a social activity, whether we fight through the crowds to catch a glimpse of the Mona Lisa, sit at an opera, ballet, play or concert. Being part of an audience connects us not just to the art but to each other. As social animals, this connectiveness is indeed essential.

What would our future be without the arts? It is impossible to imagine. Humans have always been creative. There is a deeply ingrained impulse to create and share, tell stories, build monuments, sing and compose. The question is, can there even be a future without the arts?

You get it – the arts are old. From an unknown Cro Magnum man or woman carving a fertility goddess from mammoth ivory 35,000 years ago to Picasso and Banksy. But remember that we are now living in their future. In some cases, their distant future. That is proof that the arts have been and are sustainable, and there is no reason to think that they will not be in our future as well.

One of the things the arts have been used for is to help us imagine the future. From Thomas More’s Utopia to Star Trek, authors, painters, actors, and movie makers have created a vision of the future. They have imagined flying cars and moving sidewalks, rocketships and alien races. They have also imagined perfect societies, and more recently a raft of dystopian worlds. These stories help us ease into the future and spur us on to discoveries and technological breakthroughs. They also use futuristic settings to teach us lessons about ourselves – often they are parables about race and war and environmental degredation. They also show us the consequences of taking the wrong path – about futures that are not sustainable.

To use the most narrow of definitions of “sustainable”, fiction and movies routinely warn us about the perils of environmental devastation. From Soylent Green to the Handmaid’s Tale, or even those artistic masterpieces, Planet of the Apes and Mad Max, the arts in popular culture caution us about what an unsustainable future could look like. The arts help us imagine and therefore create the future we will live in, and the consequences of living unsustainable lives. They are a glimpse into the future, and a way to vividly imagine the results of bad choices.

I’ll conclude with a statement from Patrick Kabanda, author of The Creative Wealth of Nations: Can the Arts Advance Development? On the 75th anniversary of the founding of the United Nations he wrote:

Data is important, But data alone doesn’t necessarily change people’s minds. On climate change, for instance, we have the science, but still there are many people who do not accept it, even when we throw numbers at them. So what do we need? We need stories. We need poetry. We need an emotional connection.

What Kabanda is reminding us is that the Arts are indeed essential to a sustainable future.

Posted by Stephen Lautens at 1:31 PM