Without going into commentary on why each part could be seen as lacking the direct, sincere and unequivocal apology generally required to mitigate defamation (most of them are obvious), I simply highlighted some of the phrases that clearly take away from the apology by blaming others, or worse, continuing to sow doubt about Mr. Dale's own actions.

Posted by Stephen Lautens at 7:28 PM 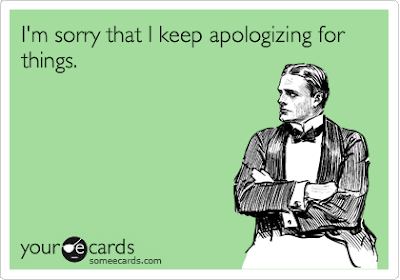 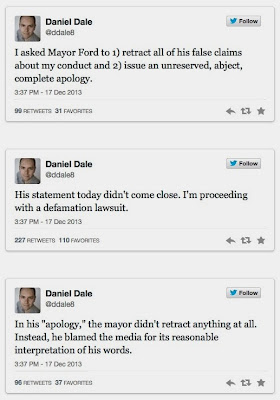 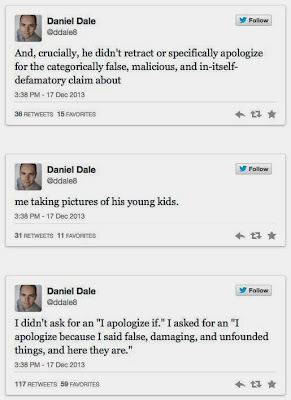 Although VisionTV has had the good sense and almost certain legal advice to take down the video, and has ordered it removed from YouTube, most people have heard of Rob Ford's description of Toronto Star reporter Daniel Dale.

For those who missed it, in an interview Conrad Black asked Ford to recall the most "offensive events" that have been "perpetrated" on him or his family by the media.

In the words of Edward Keenan of The Grid, the facts of the incident are actually as follows:


"Daniel Dale, as previously confirmed by police, was not in the mayor’s backyard. He did not take any pictures of the mayor’s property, nor of his family—a fact also confirmed by police. It was not dark outside at the time, as Ford claims, it was almost an hour before sunset. He was not, as the mayor also claimed, standing on cinder blocks, or peering over the fence—which police confirmed after viewing the mayor’s own security camera footage."

Of course everyone knew what Ford was insinuating when he said "I don't want to say that word." By saying "I don't want to say that word", Ford invited his listeners to fill in the blank with the first and most logical word that comes to mind, illustrated by the fact that the immediate and widespread reaction on traditional and social media was that Ford was calling Dale a pedophile. A few more generously-minded people softened it to the slightly better but still offensive word "pervert".

Either way, calling someone a pedophile or pervert with an interest in "taking pictures of little kids"  would clearly be slander and actionable (i.e: worthy of a successful lawsuit). But what about simply implying it without saying the magic, offensive words themselves?

The question here is, since Ford didn't say the actual word, can he be found liable for defamation of Dale by slander?

First of all, a definition of defamation. Defamation can be by either written words (libel) or spoken statements (slander). Words are defamatory if they impute improper and disreputable conduct, moral fault or personal characteristics considered disreputable by reasonable persons.

In a series of cases the courts have determined that whether

But what about when you don't actually say the "magic words" that cause offense? There has been much chatter that since Ford left the magic words unsaid, he can't be found to have slandered Dale. Unfortunately for Ford, this schoolyard logic doesn't hold up in court:


The “natural and ordinary meaning” also includes any implied, inferential, or indirect meaning a reasonable reader would draw from the words... The plain and ordinary meaning thus includes the general impression a statement is likely to create in the mind of the ordinary reader upon a first reading, not a later analysis or legalistic dissection of the words. The courts appreciate that a person intending to defame another may seek to veil his or her meaning in the hope of evading civil liability.

Ford is in particular difficulty since the meaning attached to his statement has been widely interpreted as calling Dale a pedophile. It has been repeated in the media as the inescapable word he "didn't want to say". The sixth grade "I can't help what you're thinking" defence doesn't work in court.

Given the opportunity to correct, apologise, explain or soften his statement, Ford has rather doubled down  the Tuesday after the interview aired and said: "I stand by every word I said with Mr. Black in my interview," knowing what the popular interpretation had been. Rather than apologise, Ford affirmed the alleged slander knowing full well what the public took his meaning to be.

A further distinction without a difference is the suggestion that in speaking with Black Ford was merely "reliving the moment" when he confronted Dale and expressing what he was thinking at the time. The facts as found by the police don't support Ford in his belief that Dale had taken any photos of Ford's children, so it was not a reasonable belief to being with.

It is hard to see how it is any better for a slander action for Ford to say that it was at the time of the confrontation he thought Dale was a pedophile, and in his interview with Black he was just recalling it without saying he no longer believed it to be true. Ford has never apologised for such a mistaken belief and has now repeated it and says that he stands by it. To say that he was merely repeating what he was thinking at some time in the past doesn't excuse a present slander if he leaves the door open for his audience to think he hasn't changed his mind.

Finally, the facts as found by the police in their investigation also don't help Ford in the limited defence to a lawsuit for defamation, which is claiming that the statement is true. All the evidence points to the fact that Ford's version of the events (including his own security camera footage reviewed by the police) is not true. Asserting that it is true in spite of the evidence is not reasonable. Even if there was any evidence that Dale did take photos on Ford's backyard (which there isn't), that is far from proving that he has a perverse interest in Ford's children and is a pedophile, which is where the damage lies.

Trying to assert the "truth" of what Ford said in his Black interview is a defence that will go nowhere and would likely only lead to greater damages being awarded to Dale from an impatient court. Courts have recently held that damages may be increased by the defendant persisting in a plea of justification with knowledge that the words complained of were false (Sutcliffe v. Pressdram Ltd., [1991] 1 Q.B. 153 at 184 (C.A.), per Nourse L.J.).

Regardless, unless there is a full and abject apology forthcoming, Rob Ford has a difficult legal road ahead with few rest stops along the way.
Posted by Stephen Lautens at 7:38 PM

With the surprise and non-nonsensical announcement this week that Canada Post will end home delivery - making Canada the only developed country without it - I felt that a commemorative stamp was in order. 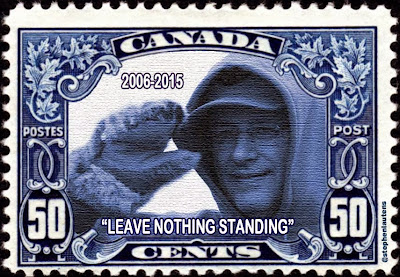