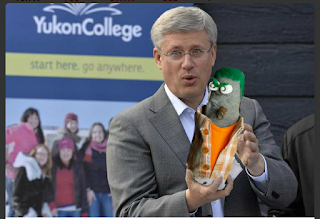 Just started a new project with Steven Kerzner, also known as the famous Ed the Sock's human alter ego. Steven and I have been circling each other for a couple of years - meeting each other at events, having a laugh over lunch. We've been saying we should do something together. I'm flattered because I'm a big fan and watched him on CITY TV and elsewhere for years. Ed's "Fromage" music video special was always a favourite.

Yesterday we taped our first half hour podcast about politics. Steven and I are both avid political observers and what you get is us just chatting and hopefully having fun and cracking wise. We're going to do it once a week through the election and maybe beyond. Here's our first podcast on why Conservatives aren't funny.

Posted by Stephen Lautens at 10:46 AM

The hits have been coming fast and furious with the Duffy trial. Nigel Wright was caught in ever-shrinking circles by sticking to his story in the face of contradictory emails. PMO lawyer Ben Perrin testified that he also knew about the Duffy payment from Wright, and that Ray Novak was also in the room.

While that is about to break for a recess, the trial of Special Advisor to the Prime Minister, Bruce Carson is about to start September 8th. Mr. Carson was convicted of two counts of fraud, one during the 1980s and again in 1990. His 1980 conviction resulted in prison time and his disbarment as a lawyer by the Law Society for two counts of defrauding clients.

Carson worked for the Prime Minister in the PMO from February 2006 to 2008, and then again in 2009, after which he landed softly in a government funded "Canada School of Energy and Environment" in Alberta. Harper - whose security detail and PMO vet the most casual contact with the PM - claims to have not known about Carson's criminal convictions and disbarment. Ahem.

Carson has since been charged with three counts of prohibited lobbying and a single count of influence peddling. His trial finally gets underway in two weeks. 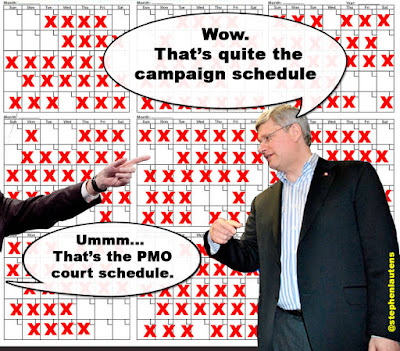 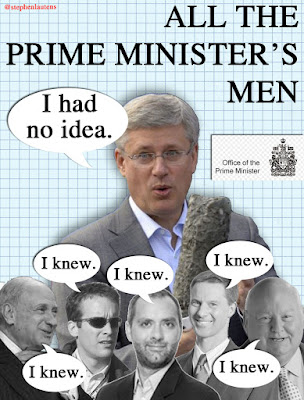 Posted by Stephen Lautens at 9:26 AM