I think the Supreme Court of Canada said it best.

In 2005 (R. v. Wiles, [2005] 3 S.C.R. 895 at 901) the Supreme Court of Canada said: " The state interest in reducing the misuse of weapons is valid and important. The sentencing judge gave insufficient weight to the fact that possession and use of firearms is not a right or freedom guaranteed under the Charter, but a privilege."

The SCC said the same thing in R. v. Hasselwander [1993] 2 S.C.R. 398: "Canadians, unlike Americans do not have a constitutional right to bear arms.  Indeed, most Canadians prefer the peace of mind and sense of security derived from the knowledge that the possession of automatic weapons is prohibited."

Pretty much the end of it.

[16] Moreover, contrary to the Montagues’ contention, the Supreme Court of Canada has addressed the question of whether the possession and use of firearms is a constitutionally protected right and has rejected the notion that Canadians have an absolute constitutional right to possess and use firearms. See R. v. Wiles, [2005] 3 S.C.R. 895, at para. 9; R. v. Hasselwander, [1993] 2 S.C.R. 398, at para. 414. Although s. 7 of the Charter does not appear to have been expressly invoked in those cases, the Supreme Court stated in Hasselwander at para. 414 that, “Canadians, unlike Americans, do not have a constitutional right to bear arms.” In Wiles at para. 9, the Supreme Court said: “[P]ossession and use of firearms is not a right or freedom guaranteed under the Charter, but a privilege.”

[19] The Supreme Court has also recognized that the possession and use of firearms is a heavily regulated activity aimed at ensuring peace, order and public safety: see Wiles, at para. 9; Reference re Firearms Act (Can.), [2000] 1 S.C.R. 783

Some people point to some ancient English common law right to arm yourself. Not any more. Not even in England. They point to section 26 of the Charter that the "guarantee in this Charter of certain rights and freedoms shall not be construed as denying the existence of any other rights or freedoms that exist in Canada," which they say includes the common law "right" to bear arms. That was specifically shot down in the 2010 case of R. v. Montague (above, para. 17). The common law of gun ownership was completely eclipsed by the enactment of the Firearms Act and regulations. When comprehensive legislation comes, it replaces the common law, which was again affirmed in R. v. Montague (above, para. 19). The common law only continues to exist in areas not covered by legislation. The field of gun regulation is pretty well covered.

Of course, property can't be taken without the authority of law. The current regulation suggests that owners of the 1500 variants and mods of the dozen or so newly-prohibited guns will not have to turn them in. It specifically refers to them being "grandfathered" to current owners (page 65 of the OiC). Government officials (and the published Order in Council regulation) have said this new regulation will not require owners of these now-banned guns to hand them over. They just won't be able to buy any more or sell them to anyone but the government. They will apparently no longer be able to take them to gun ranges either to target shoot as they have been moved into the prohibited class of weapons. They become museum pieces. 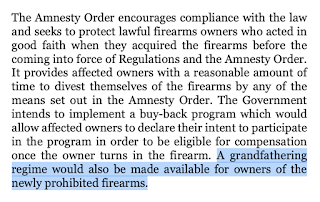 Even if owners of these guns had to turn them in, that would not be without precedent either. There are many examples of things that were once legal and then became illegal. Lawn darts were legal in Canada until 1989. You could get toothpaste containing both radium and thorium in the 1920s. Even drunk driving in and of itself was not a criminal offence until 1921. Then it was. At one point, citizens could possess dynamite and explosives without a permit or license. To make this point I even did a tongue in cheek (but legally correct) Facebook post about when it was legal to own a bear in Canada - https://www.facebook.com/stephen.lautens/posts/1330220000522420

But what about my "property rights?" some gun fanciers cry. There are lots of examples of regulating, banning and even expropriating property by the government. Think of large capacity magazines and silencers, or moving some short-barrelled pistols from the restricted to the prohibited lists. The reality is, governments regulate property rights all the time, the result of which is sometimes you can't own something anymore. Governments also have the right to seize personal property under the law. No province requires that individuals whose property is targeted by civil forfeiture proceedings be convicted of or even be charged with committing an illegal act. There are all kinds of examples of expropriation of personal property and land. In the case of Quebec (AG) v. Laroche [2002] the court ruled that there was no "constitutional guarantee of property rights, which was deliberately not included in the Charter."

I've had non-lawyers (but somehow constitutional experts nonetheless) also try to shoehorn gun ownership rights into Charter sections 7 (liberty) or 8 (unreasonable search or seizure). Nope. Section 15 (equality rights), because it's unfair that First Nations have an exemption for firearms (which they have historically have had for a long time). Nope again. Section 26 (common law continues)? Nope. See above about Canadian firearms laws and regulations covering the field.

And it's interesting that some of the people arguing for an expanded interpretation of the Charter are the same ones who complain about "judge-made law."

Canadian law is shaped more by "peace, order and good government" than "stand your ground."

"But this won't solve the gun problem," is the other complaint.

Legal guns do end up in the hands of criminals. Every gun starts life as a legal gun. Then they get stolen, smuggled or lost, or an otherwise "legal" gun owner suddenly undergoes a crisis and crosses the line to illegal by his actions. Most gun owners are responsible and law-abiding, but that in and of itself does not create an entitlement.

I don't see this as a solution to crime, but rather a policy statement about where Canada is going. Unlike our southern cousins, we do not want to become a gun culture. They are all past the point of no return in terms of firearm saturation (120.5 guns per 100 Americans in 2017, and rising). As for crime, it is pretty much steady in Canada. Youth crime was down 10.5% in 2018 while violent crime was up 1.4%. There is a slight trend upward, but hardly a crime spree as the Conservatives like to fearmonger. And we are already pretty tough on crimes involving firearms, contrary to what the Sun chain likes to proclaim. I expect it will be down substantially when the new numbers come out because of the decriminalization of marijuana.

I have had a PAL for over 30 years. I don't get emotional about guns. They are fun to shoot but they are just things, not a lifestyle or religion. They don't represent some long out of date mythology of freedom or Wild West idea of self defence. That isn't part of Canada's culture. Traditional subsistence hunters still have access to the guns they use as tools. No hunter uses any of the guns listed (except maybe the M14). These are hobby guns. Target, range and "collector" guns - just an expensive version of lawn darts.

Restricting the future availability of some kinds of guns may not have any effect on our crime rate, but it says something about what we aspire to be as a society.