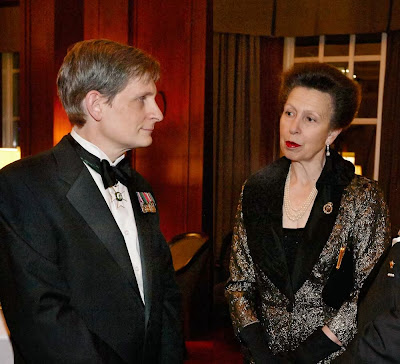 Last Wednesday I had the honour of meeting HRH Anne, The Princess Royal, at a gala charity dinner put on by the 33rd Signal Regiment Foundation at The National Club.

Although it will come as a shock to my many progressive friends, I have a semi-secret life as this year's President of the National Club. As President, my official duties included greeting the Princess Royal on her arrival earlier in the day at the Club and on her departure the next morning.

The dinner itself was a spectacular success raising about $75,000 for veteran and military family charities, and I was very proud of the many compliments I received on behalf of The National Club's staff, food and our beautiful heritage building, which had been cleaned and polished within an inch of its life for our special guest. On her departure The Princess Royal had warm words for the National Club's hospitality.

My thanks to event photographer David Batten - I missed my photo as HRH mingled with guests and he kindly obliged me with this one as we chatted later.
Posted by Stephen Lautens at 10:35 AM