The first thing you have to know is I’m not a golfer.
There was a time in my teens when I played a bit, but it never took hold of me.
I lack a number of things that are required to be a golfer. First, you have to care about the actual game of golf. On those rare occasions when I do golf, my golf game is the last thing on my mind. I spend most of my time chatting with fellow golfers, checking out the water hazards for wildlife or generally admiring the scenery.
I spend almost as much time looking for my ball in the weeds as I do keeping an eye out for the refreshment cart.
In short, I consider golf to be a pleasant outing that occasionally requires me to hit a ball.
Other more serious and speedier golfers are more than welcome to play through. For some reason I have noticed that these more dedicated golfers never seem to be enjoying themselves as much as me, which is strange since they are playing a much better game.
Golf is supposed to be a stress reliever, but some of these golfers look like they’re ready to pop an artery when a shot goes astray. My solution to an indifferent game of golf is to stock up beforehand with a plentiful supply of cheap golf balls.
I have a simple rule - when I run out of golf balls, the game is over.
I was once partnered at a charity golf tournament with an acquaintance who I knew took his golf seriously. He was a fairly tightly wound accounting executive, so I knew this was not going to be a leisurely stroll in the woods. He began by announcing that no round of gold should take more than three and a half hours and with that we ran the course.
I was leaving balls behind like Titanic survivors on ice floes. We only paused long enough for him to have the occasional mini tantrum when his ball didn’t behave as ordered. By the end of eighteen holes I was exhausted. I may have had a great cardio workout, but I can’t say it was enjoyable.
My golfing these days is restricted to charity tournaments I can’t get out of. That means I play at most twice a year, sometimes not at all.
I can’t justify spending the better part of a grand on my own set of clubs. The bag I inherited from my grandfather has an odd assortment of clubs he picked up cheap at various yard sales and were used for hitting more rocks than golf balls. Somehow they just don’t impress at some of these fancy country clubs. 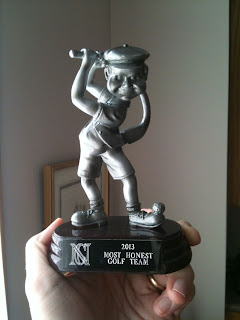 So last week I borrowed a set of clubs from a woman I used to work with. I got through the first three rounds before I realized she had a left-handed putter. My game improved slightly when I switched to my right.
More importantly, in this recent tournament I was paired up with my friend Norm.
Norm announced he had his eye on winning a trophy. That would usually be trouble for both of us, since having me on his team would guarantee he’d finish well out of the money.
Fortunately for both of us, the trophy he had his eye on was “Most Honest Golfer” – typically given to the team whose score is so bad you know they didn’t cheat. Norm is my kind of golfer.
So next time you’re over, make sure to ask to see my golf trophy.
Posted by Stephen Lautens at 1:51 PM