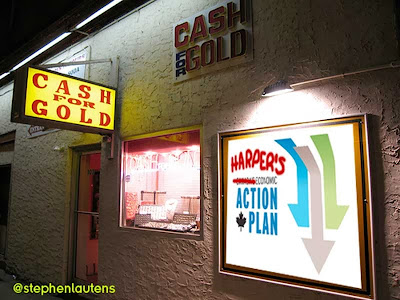 It turns out these aren't the modern 1 oz Maple Leaf coins the Mint churns out for high-roller birthday presents or paranoid doomsday survivalists:

"After a century of sitting in cloth bags inside the Bank of Canada vault, they are among a wide range of assets the Conservative government is liquidating – in this case literally – to save taxpayers a few dollars and help balance the books. The plan is to melt down more than 200,000 gold coins from the years 1912 to 1914, when Ottawa suspended the gold standard."

I don't feel much one way or the other about gold itself. As a metal it has limited use and I've held a 400 oz bar in my hand without going all Goldfinger inside. But two things bug me about this announcement.

First, these coins are part of our history, and melting them down ( especially at a time when gold is at a 10-year low in price - nice market timing, Conservative economists) seems like vandalism.

Second, has the Canadian economy been so mismanaged that Harper & Co. have to rummage around in the back of the drawers to find stuff to take to the pawn shop?

From the article: "The sale is unlikely to make a big difference to Ottawa’s bottom line, but it is among a string of recent moves by the federal government to unload public assets as it moves to balance the books by 2015."

Next: look for a good deal on Library of Parliament books on Kijiji.

Posted by Stephen Lautens at 9:38 AM