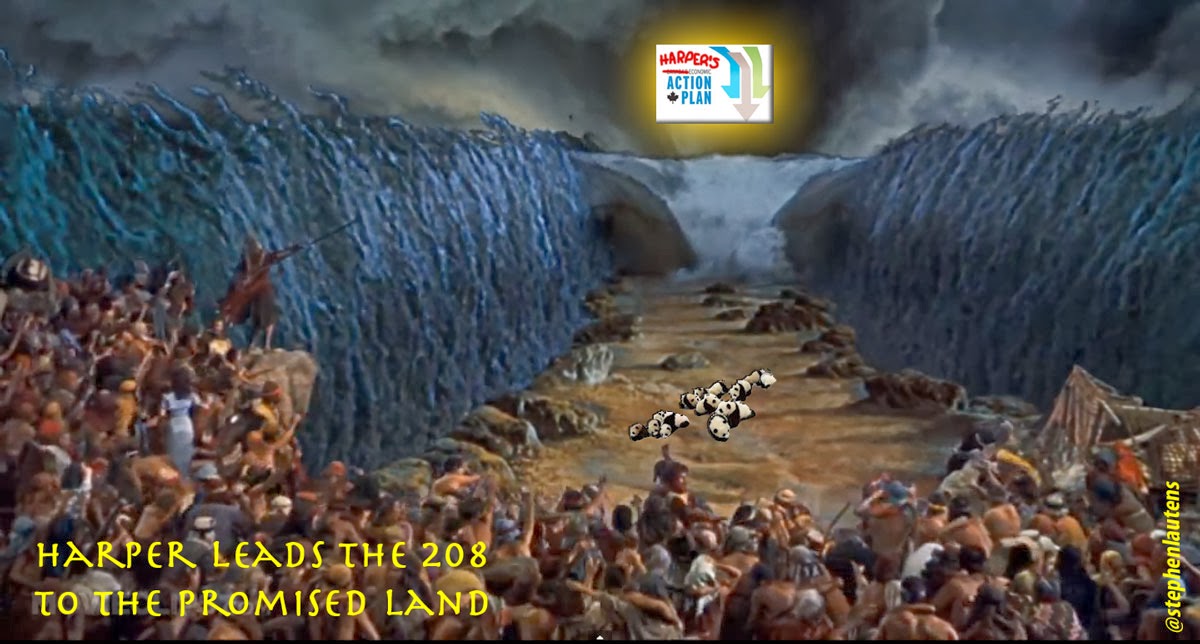 My own grandmother grew up in the Jewish part of Winnipeg and peppered her language with Yiddish expressions picked up from her friends. I'm not sure if "schnorrer" was one of them, but it came to mind recently with Harper's trip to Israel.

"Schnorrer" is a Yiddish word meaning freeloader, and it seemed appropriate when applied to Harper's massive entourage of guests who accompanied him to Israel - 208 of them according to the official count, by far the largest delegation in living memory.

With typical Harper Government™ openness and transparency, even though the final list of delegates was ready January 8th, it was only released January 18th, and then only to the press on the trip a hour after the plane was in the air. It still hasn't been posted officially anywhere I can see on a government website.

Sun columnist David Akin on the trip hastily scanned a copy of the list during a refuelling stop in Germany and posted it.

Of the 208 people with Harper, there are 21 rabbis in the delegation, presumably because Israel has a rabbi shortage. On the list is Dr. Marvin Levant, father of Ezra Levant, brave Sun TV anti-subsidy champion and inventor of "Ethical Oil". There are six evangelical Christian ministers, including the leader of Harper's own Christian and Missionary Alliance Church as well as the Evangelical Fellowship of Canada, Trinity Bible Church, the Pentecostal Assemblies of Canada and Crossroad Christian Communications. The evangelicals here as in the US are profoundly obsessed with Israel as it relates to the Rapture and the Second Coming of Christ, and for their part the Israelis put up with them with what can only be considered bemusement since they are major contributors and supporters.

Then there appears to be 7 members of the Jewish National Fund along for the ride. You may recall that they had Harper as their guest of honour at their multi-million dollar fundraiser a month or so ago, and in return they created the “Stephen J. Harper Hula Valley Bird Sanctuary Visitor and Education Centre” in a nature park in a northern valley bordered by the Golan Heights. Presumably it's a good place for Harper to let his couple of hundred cats roam.

Most of the 208 Schnorrers on the trip (including head scratchers like the CEO of the Keg Steakhouse and Stockwell Day & family) have their way paid by the taxpayer. Accompanying press had to fork over $8000 each for just the flight and hotels for the 4 day trip. From the lack of information forthcoming from the PMO it's impossible to tell if charity cases like the Reichmanns, Aspers or the CEO of Air Canada had the Canadian taxpayer pick up their tabs as well.

Another point I made on Twitter - it used to be that virtually all official visits and trade delegations included as a matter of course a token Opposition MP or two. Of course, any semblance of a lack of partisanship went out the window a long time ago with Harper.

I should point out that not all people on these official trade delegations ask to come. Sure - there are always line-ups of people trying to mooch a free ride on the government's tab. There are also those people the government lobbies to come along because they add an air of respectability and legitimacy to a government trip. I was with a company a few years ago that was repeatedly asked to accompany Harper on a visit to Asia, which we declined in spite of considerable pressure. Looking at the list of people on Harper's Israel trip, it's hard to see who might lend it an air of impartial respectability.

Of course the whole thing is just a pre-election campaign stop for lots of video and photos and a free trip for the freeloaders, as well as cementing support from both the Jewish and evangelical base at home for 2015.

Next year in Canmore!

Posted by Stephen Lautens at 10:37 AM