Niqabs, Citizenship and Promoting Fear of “the Other”

Subject: Full face covering during the citizenship ceremony?
Our Conservative Government believes that taking the Oath of Citizenship is an important step in affirming one’s commitment to Canadian values and traditions.
At the very moment newcomers are joining the Canadian family, we believe new citizens should recite the oath proudly, loudly and for everyone to see and hear.
That’s why our Conservative government strongly opposes the wearing of a niqab – or any face covering – that would stand in the way of reciting the Oath of Citizenship and pledging allegiance to Canada and our Queen.
Canadian citizenship confers both rights and responsibilities. The rules for obtaining it should apply ‎equally to all.
We believe that when someone becomes a Canadian citizen, they should embrace our culture and everything that makes us proud to be Canadian. That should be done without interference, freely and openly. It’s why we filed a notice to appeal this week’s court decision allowing people to wear the hijab while taking the Oath.
As Prime Minister Harper said in Quebec yesterday: “It is offensive that someone would hide their identity at the very moment where they are committing to join the Canadian family.”
Add your name if you agree with our Prime Minister.
Sincerely,
Chris Alexander
MP, Ajax — Pickering
PS — Forward this to a few friends to help us spread the news.

What the Minister of Immigration is of course referring to is the case of Zunera Ishaq, an immigrant from Pakistan who passed all the requirements of becoming a Canadian citizen, but was stopped at the final ceremony from taking the oath because she is a Sunni Muslim and wears a niqab. She wanted to take the oath of citizenship while veiled. She sued the Minister of Citizenship and Immigration in Federal Court claiming the government’s policy on veils violates its own rules and won in February. The Harper government has decided to appeal. 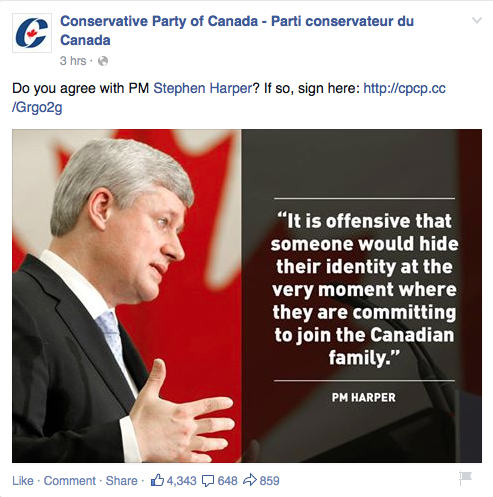 There are two important things to keep in mind. The first is, there is no law against taking the oath of citizenship while veiled. It was never debated in Parliament or passed into law or regulation. With the arbitrariness of Louis XIV, it was simply something the Immigration Minister told the department he didn’t like. Secondly, it was not about identifying the person taking the oath. Ms. Ishaq had already allowed officials to visually identify her at every step of the way by lifting her veil in private.

The Federal Court agreed, saying there was no valid reason to have a “policy” to require Ms. Ishaq to take the citizenship oath unveiled. That means the government’s motivation is about something else. The best explanation about what that something else is can be found in the Immigration Minister’s email to the Conservative Party faithful above.
Harper Minister Alexander says: “we believe new citizens should recite the oath proudly, loudly and for everyone to see and hear.” This harkens back to “ye olden days” when people were illiterate and oaths were called out before (equally illiterate) witnesses and a watchful, wrathful God when swearing fealty to your lord and master or when justice was a community affair. Usually you put your hand on the Bible and the other up to heaven, which would put your mortal soul in danger if you lied. We still do this in court with witnesses, not that it prevents lying, a wrathful God notwithstanding. We do it because it is expedient and we have perjury laws to punish false statements. I am myself a “Commissioner of Oaths”, "appointed by Royal Authority" and empowered by the province to take statements sworn under oath.

But in a citizenship ceremony the oath is the very last stage in the process. Tests have already been taken, qualifications examined, documents have been signed. Say the words, get your picture taken with a Mountie, and you are a citizen:

“I swear (or affirm) that I will be faithful and bear true allegiance to Her Majesty Queen Elizabeth the Second, Queen of Canada, Her Heirs and Successors, and that I will faithfully observe the laws of Canada and fulfil my duties as a Canadian citizen.”

In fact, citizenship in Canada can and has been granted without attending a citizenship ceremony, The Minister even has the power in certain circumstances to waive the requirement to take the oath of citizenship, and has done so. 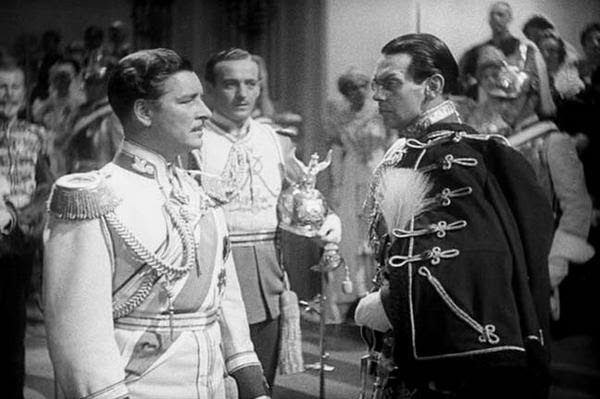 Perhaps in “ye olden days” spies, traitors, fifth columnists and others might avoid the wrath of their god by falsifying an oath. By not saying the magic words (or muttering “not” under your breath or employing the schoolyard trick of crossing your fingers), you were not bound by your oath and could then plot the overthrow of the King of Ruritania with a clear conscience. Perhaps that is why, in the words of the immigration minister, people were made to “recite the oath proudly, loudly and for everyone to see and hear.” No funny stuff. Say it in the public square and no backsies.

Also, no slipping in a double or stooge (usually an equally evil maid or servant) to take the oath for you in the tradition of poorly-written romantic, sword and saddle fiction, leaving you free to assassinate the king later with a clear conscience - “Ha! Take that you scum! I never took the oath – it was my manservant in disguise, and so I am free to betray you and take your kingdom and marry the Queen!”

Lawyers, especially ones concerned with the Charter and Constitution, ask the question “what then?” as in, if Ms. Ishaq somehow tricked the good people of Canada and its trusting Minister of Immigration into not actually taking the oath, what then? Assume she managed a switch and had a veiled body double standing by who took the oath for her. What then? Remember that she had already qualified for citizenship and the oath was the last ceremonial step. It is not like she got someone to write the tests for her (the taking of which she did identify herself for).

This is the red herring Stephen Harper tossed out to the Conservative base when he said it is “offensive that someone would hide their identity at the very moment where they are committing to join the Canadian family.” If it wasn’t her under the veil at the oath-taking, the person she had switched would not automatically become a Canadian citizen in a case of, as Harper puts it, mistaken identity.

If it was not her under the veil, or if she had not actually said the oath because we couldn’t watch her carefully under the veil to see her lips move “loudly and proudly”, then she doesn’t become a citizen if anyone ever finds out. In other words, the only person she hurts is herself, as she can tell no one that she didn’t really take the oath without losing her citizenship.

In the schoolboy fiction of Harper’s worldview, we are not left with any reasonable reason to require someone who arrives to take the oath and identifies themselves, to not wear religious, cultural or ethnic clothing. There might as well be a ban on lederhosen or wooden shoes.

There is the mystical reason from the Middle Ages that an enemy cannot be made to say a true oath. They used the same idea on witches, that their tongues would wither or burst into flames on saying the Lord's Prayer or other holy words. There certainly is some of this in the Harper government’s attitudes. The oath is more than just symbolic – it’s magic, literally.

The more sinister connotation is that the Harper government has decided that certain people do not look like Canadians when taking the oath, or as he says “joins our family.” This is xenophobia, pure and simple. Prior to our more open immigration policies, even Canada had an idea of what members of the “Canadian family” looked like. Preferred immigrants looked like “us” – ideally British (including Scots and grudgingly, the Irish), Germans and other northern Europeans. Chinese, other Asians, people of colour, and even Jews, simply would not fit into the Canadian family of Sir John A. Macdonald. Their food, their clothes, their religions, were different, too different, and therefore not to be trusted.
Others have already noted that Immigration Minister Alexander’s email refers to “this week’s court decision allowing people to wear the hijab while taking the Oath.” The Federal Court decision was actually about niqab, which is traditional Muslim dress that covers the full face. Hijab does not (it covers the hair, like a nun’s habit). The use of hijab could just be a mistake made out of ignorance, or more likely a deliberate choice because the Conservative Party base knows what hijab is and is most closely associated with Islam and maybe they'll see how far they can push it.

Niqab or hijab, the Federal Court has said that there is no logical policy or valid legal reason to ban it at citizenship ceremonies. It almost certainly violates the Charter in addition to the reasons given by the Federal Court, and is hard to imagine being saved as a demonstrably reasonable limitation. The Harper Government is appealing the decision, and it will certainly lose.

But winning the case is not the point. The point, as always, is to feed their supporters’ xenophobia against the most visible and convenient current political straw man - Islam – appealing to their emotions and not their reason. “Fear the stranger” has been around and used unscrupulously since biblical times. Many of us have moved past it. The Conservatives have not. More than that, they have embraced it, to our shame if not theirs.

Posted by Stephen Lautens at 12:54 PM