Even as history is being written, it is being re-written.

We are only a few short days after the federal election and we already have people trying to both make sense of it and rewrite what happened so they make sense in retrospect.

In dodging the blame for the Conservative collapse, Harper's MPs (the surviving ones, anyway) are already distancing themselves from the train wreck that was #elxn42. It is usual to blame the organizers of a losing campaign. Calgary Conservative MP Ron Liepert has talked about troubles at the top. Others are starting to say, after years of cheerfully regurgitating PMO talking points and clapping in the House of Commons like exceptionally well trained seals, that they have had their doubts about Harper's leadership style and direction for the Conservatives for a while. 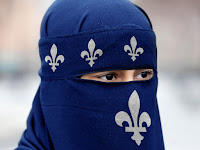 The NDP is in a hunt for a plausible reason for their electoral collapse. They are not willing to admit that the first thing to realize is that the 2011 results were an anomaly. A bad Liberal campaign where Harper hammered away at them giving the NDP a free ride combined with the emotional reaction to an energetic and dying Jack Layton gave them a once in a lifetime nexus of popularity. They mistakenly believed they had turned the corner to permanent ideological acceptance and love by the Canadian voters. They hadn't, and it's hard for them to accept. The NDP in ascendance is not the new normal, typified by the election literature claiming the NDP only needed a few dozen "extra" seats to form the government, as if the ones they had going into the election were in the bag.

Looking for a reason for this reversal of the orange wave of 2011 after the NDP had a chance to dig in and fortify their hold on these Quebec ridings, a common talking point has emerged since Monday. As Gerry Caplan voiced:

Of course it's also arguable that the NDP made the ultimate sacrifice: In the face of Harper cynically playing the anti-Muslim card, the NDP threw away votes on a matter of principle -- supporting the right to wear a niqab -- and indeed fully paid the penalty for doing so. It cost the party their Quebec base, and with it any reason why the large "Anyone But Harper" crowd across the country should think of supporting the NDP. The noise you heard in the last week of the campaign was of progressive ABH voters flocking in their tens of thousands to the Liberals.

It sounds noble and high-principled, except for the fact that the Liberals had the exact same policy towards the niqab ban as the NDP. Liberal leader Trudeau voiced his opposition to the ban on many occasions before and after the election campaign. You're not going to leave someone over a position on an issue if the person they go to supports the same position. Still, it's an appealing if unsupportable theory if you are the NDP - you lost votes over supporting a just and noble principle. It has been repeated many times now and some will accept it as gospel as it fits the NDP narrative as being too good for politics. It's just that it isn't true - at least not on the niqab issue and the Liberals. Perhaps in their loss of the 7 Quebec seats to the Conservatives and 9 to the Bloc.

There are lots of other reasons for the crash back to earth of the NDP. Just as they had an orange crush the pendulum has swung the other way with a red tide. The 2011 election for the NDP was not "the new normal" as they would like to believe which makes its return to third party status such a disappointment after travelling from Official Opposition to possible majority, to kingmaker in a minority to largely ignorable. As the NDP moves forward into a dissection of the 2015 election they could find many reasons for their fall - peaking too early, adopting an austerity no-deficit financial platform, a leader who came across as petulant and stodgy, and negative campaigning.

The one thing it was not, at least in Quebec as far as losing ground to the Liberals, was the niqab.

Posted by Stephen Lautens at 3:45 PM