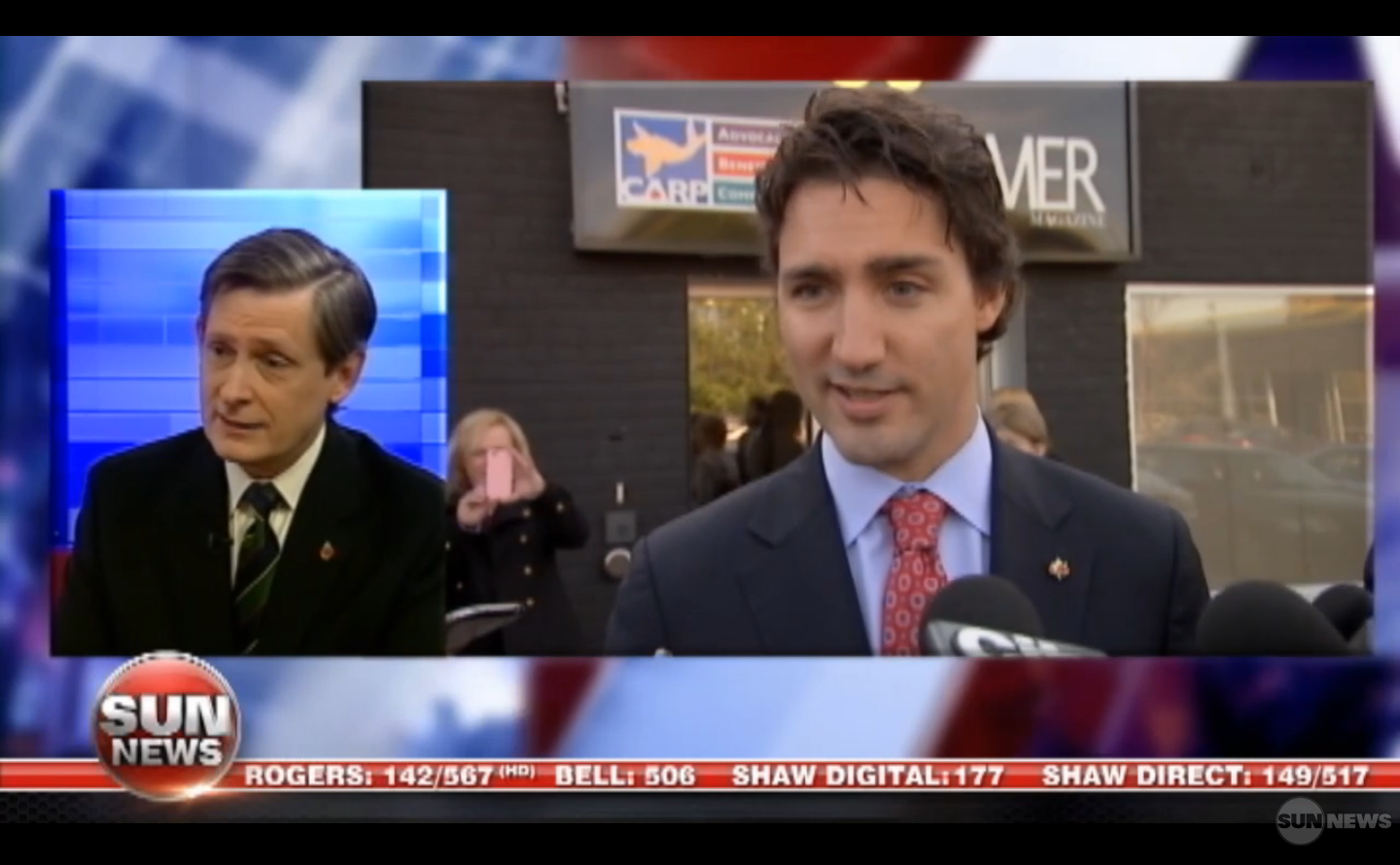 I was back on Sun News yesterday to talk about whether Justin Trudeau would recognize the Ottawa shootings as "terrorism". Apparently it is a big deal on the right to say the actual word. Mulcair has so far refused to brand the Ottawa shooter a terrorist, and frankly that's fine with me. Between my being asked to comment and showing up at the studio Justin Trudeau took the wind out of their sails and said that the Ottawa attack was indeed terrorism. Sad faces all round at a gotcha moment denied.

I tried to start my conversation with Pat Bolland with my view that the terrorist/not terrorist talk is really a "how many angels can dance on the head of a pin" question. It's pure semantics. From a Criminal Code definition perspective, the Ottawa shootings met that definition of terrorism - it is serious violence against the government for a political agenda. A finer point that may only appeal to the lawyers in the crowd is whether the shooter's mental state was capable of forming the requisite intent - i.e. - was he so nuts that the terrorist intent can't be rationally formed by him. It's an academic question that is of no comfort to their victims, but we'll never know. Clearly he - as in the other recent killers of soldiers and RCMP officers - had mental issues.

One point I tried to make is that there is no evidence we've seen that these were "directed attacks" by some terrorist organization. There's no structure or coordination to them, no funding or planning by a terrorist group. Just "lone wolf" attacks by mentally fragile people who have embraced their own skewed version of a violent fundamentalist religious movement with a grudge against authority for their crappy lives. They were "radicalized" by online videos and materials that seemed to speak to them and give their failing lives meaning and purpose. If you haven't read the old classic by Eric Hoffer "The True Believer", you should. It deals with the psychology of certain people susceptible to radical ideologies of the left, right and religion and how fanaticism fills a void in their lives. These are lost souls who find something simple and extreme to cling onto and an enemy to blame, often with tragic results.

The commentator on Sun TV before me talked about how "90% of the Muslim youth he had met were already radicalized." That's just nonsense. There are moderate Muslims by the truckload, but they can be afraid to speak up and make targets of themselves from both sides. Demonizing them as a group drives them further away. The fear mongers are desperate to spin these tragedies into something bigger because it feeds two agendas - the "law and order" security agenda, and the xenophobic anti-Islam agenda. That's why they want to label it "terrorism", because that's a big and emotional bedsheet to hide behind.

Terrorism of course exists. It has existed as long as there have been institutions to rebel against. ISIS is a particularly terrible group and is more than happy to "inspire" terrorist wannabes anywhere in the world with a few cheap YouTube videos and a call for jihadists to come join them in their miserable local war. That, however, seems to be the limit of their international ambitions, with the caveat that anyone who stands in the way of that goal is also considered a fair target. It is not a coincidence that the Ottawa shooter was set off allegedly by being blocked from leaving Canada to join them. It was when he was separated from his heart's desire that his amorphous rage turned towards Parliament Hill.

You can justify all kinds of things in the name of fighting terror that you can't in a rational crusade for better mental health funding. You can extend the reach into people's lives if it is terrorism, but not if it is the frustratingly unpredictable lives of people suffering for severe mental illnesses. Labelling actions as occurred in Ottawa and Quebec terrorism gives us the illusion that we can confront and control it, when the reality is we can't. Both killers were well known to the RCMP and still the tragedies came as a surprise. We already have ample legislation on the books - too ample in my opinion - to deal with terrorists, criminals and their enthusiasts.

As I started to mention on Sun TV, for anyone who has lived with mental illness in friends and family, you know how unpredictable it can be. With the best care and supervision, people can still behave erratically and even violently. Add a radical belief to it (and extreme religiosity is often a symptom of mental illness) and you have people who are unpredictably dangerous. How often have you heard the expression "he was quiet, polite, and kept to himself" used to describe someone who had just tragically gone off the rails? Legislation and even enforcement are largely incapable of dealing with it because of its very nature.

But these things are nuance, and the difference between "terrorism" and "Terrorism" with a capital "T" is not one many people want to make in the wake of a tragedy, especially if it feeds a law and order and security agenda already in place and looking for traction.