I’m amazed at all the fuss people are making about our Governor General recently snacking on a seal heart.

I have to say I don’t have any strong feelings one way or the other about seals in general or the seal hunt in particular, although I know it is a hot button for a lot of people. Passions run high here and overseas about seals, so it’s not surprising that taking a bite of a raw seal heart has given our Governor General a certain amount of indigestion. 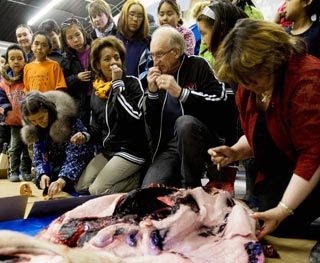 The Europeans apparently got in a real snit about it. Regardless of where you stand on the issue, I find it particularly rich, since they have a long history of hunting stags, wild boars, rabbits and blasting the heads off grouse and other birds to put them on the table. Wild game is not only considered a delicacy, but is a staple of a lot of European diets. The last time I was in a fancy restaurant in Europe, what I was given by the waiter looked more like a zoo brochure than a menu.

The animal rights people were also up in arms at the idea of cutting open an animal and eating it. Or as the VP of People for the Ethical Treatment of Animals told the papers, “It amazes us that a Canadian official would indulge in such bloodlust.” He said that the incident gives Canadians “even more Neanderthal image around the world than they already have."

While I have never worked on a farm, I am under no illusions about where the meat in my grocery store comes from. I know it doesn’t start out on a Styrofoam tray wrapped in plastic wrap. It starts out as an animal. Maybe we city folk don’t like to think too much about where that juicy steak on the barbeque comes from, but unless our school system is worse than I think, not many of us believe steaks grow on trees.

Maybe it was Governor General Michaëlle Jean’s eating the heart thing – as someone said, a little too “primitive” for our friends in Europe, who oddly have no problem snacking on force-fed goose livers, various other organs or sausages made of blood. All that is okay, but apparently the heart is wrong.

I’ve travelled a bit and have been offered a lot of things to eat that are strange by the standards of anyone who only eats fast food. I’ve had sea slug, shark and various things that crawl in the night. I didn’t enjoy most of them, but the world is a big place and people eat things out of tradition or necessity that the rest of us wouldn’t touch on a bet.

I have no problems with people who buck the evolutionary trend of our species and opt for an all vegetable diet, even though we humans have been eating meat for as long as we have been able to catch it. For the first million or so years the meat also did its best to catch us.

I remember back in college a student who did his best to make his dog into a vegetarian. I suppose it is possible to turn a dog into a rabbit, but I can tell you, that was one unhappy dog, and grateful for any hot dogs slipped accidentally to him under the picnic table.

So hats off to our GG. She’s a braver woman than me, even if only for doing what comes naturally.